By dangersandwich On June 23, 2010  6 Comments
Welcome back, dear readers!
This week, I am tracking another treat from the deep south: The Muffuletta sandwich. 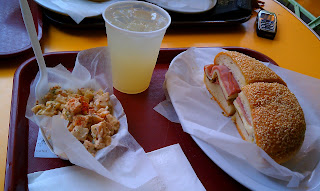 Originating from New Orleans’ French Quarter. The Muffuletta was accidentally created in the early 1900s at The Central Grocery, a local hangout for Sicilian farmers who sold their produce at the market.
The sandwich consists of capicola, salami, mortadella, emmentaler, and provolone cheese topped with a tangy olive salad, and stuffed between two halves of an Italian roll, also known as muffuletta.
It’s a thick sandwich. Really thick.
I had always heard of people mention this sandwich as it seems to be incredibly popular in Louisiana. Bobby Flay even delved into the history of the sandwich and professed his love for it on an episode of his show, Throwdown.
So when I was prompted with a suggestion of where to find a Muffuletta in Los Angeles, I was eager to try it…and try it, I did.
Making my way through the tight winding corridors of the Farmers’ Market at The Grove in Los Angeles, I finally arrived at The Gumbo Pot.
Biting into my first Muffuletta, the first thing I noticed was the olive salad, and I really, really enjoyed it. Tangy and full of flavor the olive salad really stood out among all of the other ingredients of the sandwich.
The flavor of the numerous meats and cheeses blended together a little too well, though. Nothing really stood out, nor could I tell which meats were actually even used as no single taste was discernible from the others.
The real low point for me was the bread.
And as you may know from previous posts, this can sometimes be the break point for a sandwich.
The bread was chewy, and had very little, if any, taste.
Bland would be putting it mildly when talking about the bread.
The sandwich did receive a second wind though, when the next day I braved the trials of turning on my own oven and placed the sandwich in the fires at 350 for 10 minutes to bring this monstrous creation back to life. 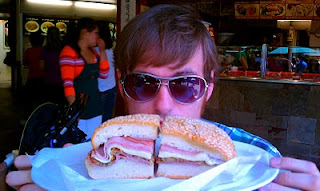 The bread was much less chewy, and I would have to say the overall experience definitely was better, but still, I was left wanting more.
Another time, Muffuletta?
All in all, my first experience with the Muffuletta was a let down. But have no fear, for I will keep my eyes and ears open for another place that offers this supposedly DANGEROUS sandwich.
Until then, dear readers…
** 1/2 Stars
The Farmers Market at the Grove
6301 West 3rd Street, Los Angeles CA

Everytime I read this its early in the morning and makes me soooo hungry!! Unfortunately I don’t know where in Philly to try these variety type sandwiches. So I propose you come back here and start reporting!!! Emily

done and done. next time i’m home, i will!

that is a cute picture of you and that sandwich 🙂 CC

Go to New Orleans and get a real Muffuletta. You won’t be disappointed. I’ve never had one outside of the Big Easy that even came close.

You changed it to a small hot muff- that’s classic! But I agree, you can’t get muffulettas outside NOLA- come down and I’ll show you! -Rachel

Ever since I started this blog, I have constantly asked for suggestions of places to try in my quest...