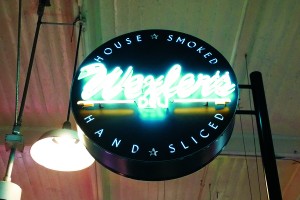 I must say that the Great State of California is truly the best in the Union, though if I had one reason to doubt that fact it would be because of one factor: Jury Duty.

Last month marked the start of the 7th year of my official residency in this, the grand 31st state of the Union. Sure we just got a better balanced budget, sure we’re pretty much out of water, sure we’re a blue state base din two major cities on the coast. We’re all of those things, but the one thing California is really good at?

CALLING ME FOR JURY DUTY.

Seriously. Third time in seven years of residency. That’s insane, right? Well, if nothing else, it gives me time in Downtown LA during the week in order to try some of the delicious sandwiches there that aren’t available on the weekend.

Though if someone from the Justice system is reading this, it does not give you an excuse to call me again next year.

After narrowly escaping being called to a 40 day criminal trial, I walked the short distance down Broadway to Grand Central Market.

On my first visit here 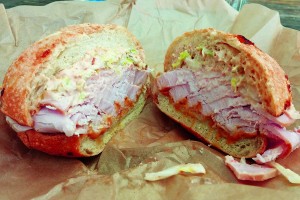 years ago, it was a loose collection of fruit and spice stands, peppered with taco establishments. While my heart still yearned for the amazing and authentic Mexican food, there were plenty of sandwich shops to distance my attention this time around. (Side note: You think you’ve tasted good Mexican food before? Try again. LA is one of the best places ever to find anything that is better than half-good and authentic. Hands down.)

The line for Eggslut was too long, and I had already reviewed Horse Thief, so after ten minutes of wandering around my eye was quickly caught by Wexler’s Deli in the center of the market. Sure what caught my idea was the thought of Corned Beef, so close to St. Patrick’s Day, and also the Reuben, but I had to go a different direction.

In this case, Bird surely was the word.

The LA Bird, a simple sandwich consisting of thick cut chunks of turkey, a spicy mustard and house-made cole slaw all on a kaiser bun seemed like the perfect cure for a day of waiting for my name to be called.

Taking the sandwich to go, I was surprised by the weight, this sandwich was no joke. Opening the wrapping, I wasn’t greeting with thinly sliced turkey, but thick chunks of meet covered in the sparse, but not underwhelming co-ingredients. 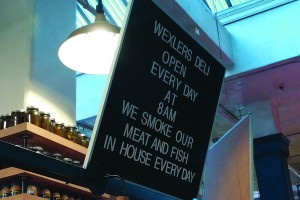 The first bite? Heaven. The roast turkey shone through with the mustard (I sensed something like horseradish or wasabi) cut through and let me know that it refused to be drowned out by the meat and the crisp cole slaw. The kaiser bun held together and was delicious as well, not only keeping the sandwich together, but co-mingling the flavors into a cohesive meal worth a second try.

Which would more than likely happen when I’m called for jury duty again in like 18 months.

The other sandwiches on the menu, some named after notable LA areas, all seemed worth a try as well, and if the LA Bird is anything like the others, I can highly recommend all of them. If you happen to be downtown while Grand Central Market is open, I highly suggest you stop by Wexler’s (and maybe all of the other places inside) as I have yet to have a disagreeable experience thus far.

So, in the end, one must consider if jury duty is actually a bad thing.

No, wait. It’s actually not, is what I mean, if you have a great sandwich shop to stop by.

Got to try a bite of this one…… soooooo GOOD! The black and white cookie didn’t hurt either! 😉 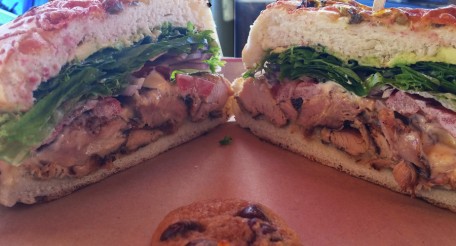 Greetings, Readers! It's been quite some time since I've been down to San Diego (here, here...