Home / Uncategorized / Eating My Way Through Portland, OR (Part 3 of 5) 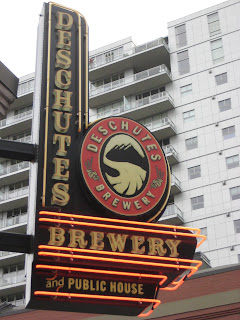 I realized while I was organizing the photos for this post, that Portland will be the second most reviewed city on the blog here, besides Los Angeles of course. which is pretty impressive as we slowly march on towards the 100th sandwich entry.

I’m hoping that as the next few months come along, I’ll be able to branch out again from Los Angeles and visit New York, DC and maybe even revisit Seattle as I was last there before my journey to find The Danger Sandwich began.

But back to Portland…

Besides visiting Portland for its incredible eats, I was also hoping to visit one of the numerous breweries in town. For being such a small town, Portland is home to more breweries than any other city in the world. 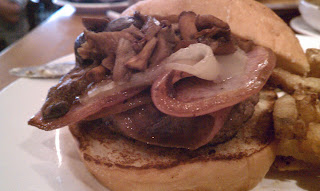 Besides hitting Rogue (which was excellent), I made a stop at Deschutes Brewery, of which I had heard much about, specifically their Black Butte Porter.

Black Butte is this incredibly rich, dark porter that has notes of coffee and chocolate. The flavor just stays with you long after you’ve finished the last sip, and now I can admit that I am thoroughly hooked on their beer (luckily a distributor nearby stacks up on Black Butte). Their other beers were also top notch and some of the best local brewed beers I have ever sampled.

This burger was excellent. The meat was cooked perfectly with a little bit of pink on the inside. The beef was tender, savory and with big flavor in every bite. The Worcestershire sauce and mustard made were excellent additions with their contrasting salty and spicy flavors. The addition of the porter to these two condiments tempered the flavors of each while adding a bit of the chocolate coffee flavor of the porter. 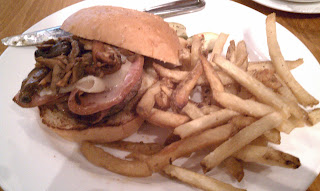 The grilled onions were freshly grilled with a bit of crunch and the seasonal mushrooms gave an excellent pop with every bite. Oh and that freshly baked roll? Delicious, fluffy, and held together until the end.

All in all, an excellent sandwich, but there was one more star of the show which we enjoyed during the beer tasting before dinner: the brewery pretzel. It wasn’t just the pretzel that was a stand out winner, it was the dipping sauce, a mixture of white Tillamook cheddar, cream cheese and Black Butte Porter mustard.

Wow. We even had to use some of the leftover cheese dip for the fries, it was amazing.

And that is that for this week’s Danger Sandwich. Week three of Portland has continued to wow me with the city’s wonderful selection of food and beer. So far I know it’s a place that I will have to return to again in order to sample more eats and beers, but will this feeling hold up through next week’s review? Or will the next sandwich fail to live up to the Portland hype?

Only one way to find out.

Until next week, dear Readers…

4 Comments On Eating My Way Through Portland, OR (Part 3 of 5)

Wow, that sounds like one hell of a combo, and to think there’s all these library jobs opening up in Portland. Hm… I know what I’m gonna eat if I have to go out there for an interview!

#1 – can we get some of that black butte beer for our party? i wonder if wegmans carries it. they have alllllllll kinds of beer, international, local, etc.

#2 – that sandwich sounds like it was made specifically for me.

sadly val, deschutes is not available east of the mississippi. so i’ll have to sneak some bottles home if we have it.

[…] off this day of tourism and sandwiching, we spent the evening along the coast at a overly adorable motel called the Sea Otter Inn. […]

Eating My Way Through Portland, OR (Part 2 of 5)

Welcome back, Dear Readers!One of the things that stood out to me while in Portland (especially...