Home / Uncategorized / Lunching with a Legend

You know, long ago I was once a fresh faced, newly arrived transplant to Los Angeles. In my early years of living in the Valley, I sought out famous places to eat that I might spot some of my favorite LA notables. One of those places was Jerry’s Famous Deli, specifically the first location in Studio City. 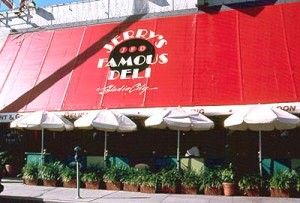 I hadn’t been back to Jerry’s though in a number of years as I had been trying to find other sandwich shops in LA, so while shooting photos for the relaunch of the site, I thought why not lunch at one of my original hangouts, where my love of LA sandwiches began.

Having been to Carnegie Deli a number of times in the last few years when I’ve visited New York, I immediately was drawn to the Sky High sandwich on Jerry’s menu. With a name like that you’d expect a mound of meat between two TINY slices of bread just like I’ve had at Carnegie with the Woody Allen.

So I went and ordered the Deli Combo Sky High, bringing together good friends Corned Beef and Pastrami. As I waited for my lunch, I enjoyed the memories I had inside this restaurant in my first year in Los Angeles. 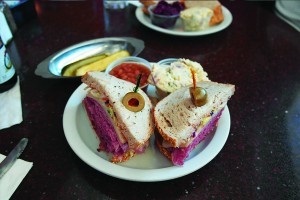 Topped with Swiss Cheese, Cole Slaw, and Russian Dressing between two slices of Rye bread, the Sky High comes across as a fairly standard deli combo sandwich. The meat was flavorful and the complementary ingredients enjoyable, but overall I was disappointed.

Sure, it had a healthy dose of delicious pastrami and corned beef on it, but here at The Danger Sandwich we like to 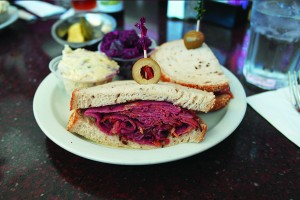 go big, especially when it’s implied in your name and you want to stand out from the rest. When you  take away the spectacle of the sandwich though, you’re left with a serviceable, though pricey, deli sandwich.

If you’re going to Jerry’s, go for the experience of being in the presence of history of Hollywood, or at least something else on the menu.

For a legit knock out pastrami/corned beef sandwich, you will probably find a few more notable and worth places in LA alone.

2 Comments On Lunching with a Legend

[…] those that don’t know, Primanti’s is known for their pastrami sandwich topped with cheese and fries on thickly sliced white bread. It’s a monster to tackle even on […]

A Work Of Art? ‹ The Danger Sandwich ● danger is the best indgredient Reply

[…] It had been awhile since I took on a pastrami or corned beef sandwich, so for this lunch break, I decided to take the New York Pastrami baguette. […] 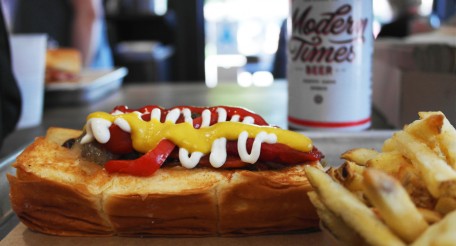 Greetings, Readers! You know, fairly often people come up to me in the street and say "Hey,...