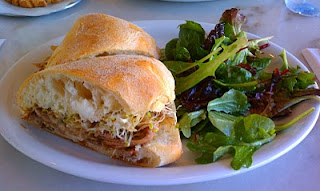 Greetings Readers!
Has the sandwich fairy visited you this past week?
It visited me, as I finally stopped at a place that I have been recommended before and has also been mentioned by various blog and magazines. For this sandwich I took a trip out to Toluca Lake (Editor’s note: It’s not really a trip…it’s only 3 miles away).
Toluca Lake is by far one of my favorite sections of Los Angeles. It’s a quaint little neighborhood between North Hollywood and Burbank with a main strip of stores that includes numerous coffee shops, diners, boutique shops, and the original Bob’s Big Boy.
And nestled on this main strip on Riverside Drive is a cafe called Sweetsalt. If you’re not looking for it, you may even miss it.
For as much as I’ve heard about Sweetsalt, it was relatively uncrowded for lunchtime on a Saturday.
Be warned though Reader, everything on the menu sounds delicious, and the daily specials won’t make your decisions any easier. After much internal debate though, I decided on the Lavender Duck sandwich.
Duck is something new for the Danger Sandwich as it has never made an appearance on a previous sandwich. It’s also been quite awhile since I’ve had duck in any meal, and for those of you who may not have had duck before, there is a problem that you should be aware of.
Duck can be incredibly greasy. It’s delicious and savory, but the grease can sometimes be offputting, depending on who makes it.
With this in mind, I bit into this sandwich, and consider my tastebuds in heaven. 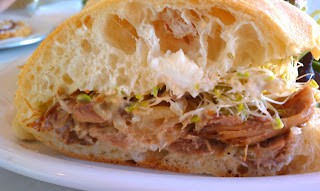 The flavors of this sandwich married together so incredibly well, and yet you could easily pick out each different ingredient as the flavors came in waves.
On your first bite you taste the bread and then right into the duck. Followed by the goat cheese, onion confit and then the sprouts. And lastly, oh what’s this? Sweetness followed by the previous savory flavors? That’s right, sweetness provided by your friend lavender honey.
The duck was tender, savory, and not greasy. It had the same texture as dark meat from chicken, but a more prominent savory flavor. This is quite possibly the best prepared duck I have ever had. And I don’t say things like that very easily.
On top of the duck is an onion confit. The onions still had a bit of crispness to them even though that had been marinated for quite some time before being added to this sandwich. Still maintaining their onion flavor, they also provided a bit of the sweetness to the sandwich.
The ciabatta bread was an excellent choice for this sandwich too. A soft and spongy inside with a nice firm and golden exterior, the ciabatta’s flavor was still noticeable even over the flavor explosion created by the rest of the sandwich.
The goat cheese on the sandwich is not the dry spread that I’ve had before, but more like a sour cream texture, easily spreadable and instantly noticeable on the sandwich with its slightly pungent cheese flavor.
This is topped off with a healthy dose of earthy sprouts and a spot of lavender honey which rounds off the flavor parade with sweetness. Delicious. 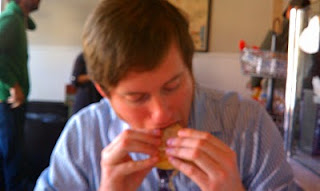 I’ve had an excellent run of sandwiches lately and the Lavender Duck sandwich at Sweetsalt is no different. I couldn’t recommend this sandwich more to someone in the area. If you’re hanging out in Toluca Lake on a beautiful weekend afternoon, definitely make sure you keep your eyes open for this quaint cafe along Riverside.
You’d certainly be missing out otherwise.
Until next week!
Lavender Duck Sandwich
**** 1/2 Stars
10218 1/2 Riverside Drive
Toluca Lake, CA 91602
www.sweetsaltfood.com

This sounds Devine. I know Toluca Lake very well. I lived in Studio City for 10 years, however Sweetsalt wasn’t there at that time. Great post. Thanks. Keri

I recently stopped being a vegetarian and have become obsessed with duck. I haven’t had a chance to get any yet though. I might have to catch a flight to LA for my lunch break.

About time someone made a sandwich with Duck in it. I’ve often wondered what would go with that well, though. Goat Cheese sounds compelling.

Don’t forget to finish off you lunch with a PB&J cookie…mmmmm I LOVE SWEEETSALT!!!

Hey Sandwich Man. I couldn’t stop thinking about this sandwich last nite. You wouldn’t have any problem with me making reference to your review on my site at http://www.samwich365.com would you?

Naturally, I will provide my readers with a link to your cool blog, and of course to Sweetsalt.

My blog is all about the sandwich, would love to have you come visit. Thanks a million, Keri

absolutely, that would be awesome!

Welcome back Dear Readers!I hope the week since we last met has treated you well.I know the sandwich...