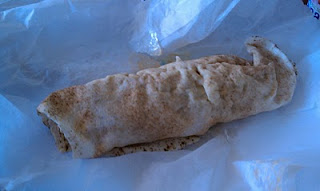 This week I journeyed to one of my favorite delis in all of Los Angeles, although I hadn’t been there in quite some time.
Nestled away in a small shopping center in Studio City lies the Tarzana Armenian Deli, or Tag Deli.
Now I’ve found that on the west coast it’s much harder to find a great deli, unlike the east coast which seems to have one on every corner. That’s why a deli with a great selection of sandwiches like Tag Deli is so exceptional.
The sandwich that is most talked about here is the soujouk. Even though they make excellent deli sandwiches here to your specifications, this is by far their signature piece.
Soujouk is a spicy Turkish sausage that is popular in the Balkans, Middle East, and Central Asia which is made from either spicy beef or pork combined with various spices such as red pepper, cumin and garlic. Delicious is what it is.
I would compare it to a very dry salami with a much stronger flavor and with a deeper red coloring. If you’re a fan of spicy, pungent meat, this is definitely for you. The smell of the soujouk made my mouth water the second I walked out the door and got into my car.
Also stacked onto this sandwich is mayo, melted string cheese, tomatoes and full peperoncinis wrapped up inside of fresh pita bread.
Not content with the supporting roles usually delegated to condiments, these ingredients not only highlight the strong flavor of the soujouk, but their distinct flavors stand out well on their own. The melted string cheese is an interesting choice for this sandwich, but adds a very mellow flavor of cheese that works well with so many strong flavors fighting for the spotlight.
One of my favorite parts of this sandwich was biting into a whole peperoncini…well three of them actually. The spicy and mildly sour flavor that each one of those added was heaven to me. So if peperoncinis are not one of your favorite additions to your sandwich, make sure you let them know to leave a few off.
The pita bread was the only part of the sandwich that wasn’t a superstar. It was a bit too thin and because of the rich ingredients, occasionally fell apart in my hands towards the end of each half. It wasn’t terrible, but could have been a little better. I wonder how this sandwich would turn out between two slices of foccacia instead.
Maybe it’s worth suggesting on my next visit.
Regardless, this is one of my favorite sandwiches in Los Angeles. You definitely need to check it out, or find an Armenian deli near you.
Until next week, Readers!
Soujouk Sandwich
**** Stars
11288 Ventura Blvd.
Studio City, CA 91604
http://www.tagdeli.com/index.php

5 Comments On Soujouk, So Good!

Soujouk sounds awesome! I imagine the string cheese is used because it’s similar in consistency to Armenian cheese, but lacks the heavy black peppery flavor of Armenian cheese, so would meld better with the soujouk, pepperoncini and tomatoes.

Ben! thanks for that informative tip!

Man, now I really want a Soujouk for lunch….

I love soujouk. I first came across it when I lived in Southern California and came across an Armenian restaurant in Anaheim called Ararat (on Katella Avenue). This was in the 1990’s and I’ve loved it ever since. Here in Kalamazoo, MI, there’s a Lebanese restaurant called Shawarma King and it’s among their sandwich specialties, made much the old-style way just as at Ararat. Drop by each place for a try.

Hello again, dear Readers!This week was a very special visit for The Danger Sandwich. After...