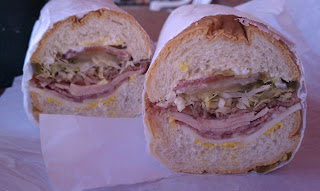 I am sad to announce some very bad news to you: this is the last entry in our Burbank adventure.

Did you think I was going to say I was ending the blog? Because that’s insane. I may be on a new diet and exercise routine, but that does not mean I will give up my love of sandwiches, nor my love of reporting it.

The real problem with writing about Burbank is that there are just too many places to review, so I will have to tackle this area again in the near future.

On our last stop in Burbank, my traveling partner Bryan mentioned that the Burbank Deli & Carryout was known to have the best liverwurst sandwich in town. Now, I have never had liverwurst, nor had I even thought about it as a possibility for consumption, but I was up for the experience.

If i was going to try it, why not at the deli with the sign that says “best wurst in town”?

Sadly though (or luckily enough?) the deli hadn’t served liverwurst in a few years, but had kept the sign because it had become such a staple of the shop. Speaking with the sandwich artist we were recommended two different sandwiches: The Pastrami and the Assorted Meats.

Each of the meats lends their own distinctive flavor without really tripping over each other. The ham and bologna flavors blend well together with the salami and roast beef sticking out from the crowd with their own distinctive flavors. The peperoncinis and jalapenos add a spicy kick while the lettuce gives this meaty sandwich a little bit of crunch.

Oh, and the roll held up throughout the entire ordeal. Quite the feat for how much is contained inside.

So this ends this journey through Burbank to discover some of the best delis in town. Besides finding numerous delicious sandwiches to eat, I think I gained an insight into what makes Burbank a great town.

Not only did we find great neighborhood delis, but we met the people who owned them, who worked in them, and who added to the great culinary experience of Burbank.

Meeting the people was just as enjoyable as eating the sandwiches that made them popular.

Greetings, dearest Readers!I hope that the Sandwich Gods have treated you this past week to deliciousness...