The Hills Are Alive…With Deliciousness

The Hills Are Alive…With Deliciousness 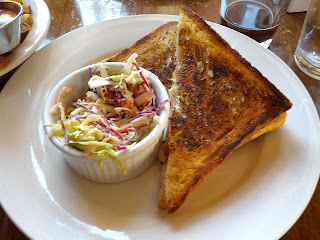 How are you faring now that the election season is finally over?

Did you have a sandwich to celebrate the fact that it will be at least a week without political ads before the next election season begins?

This past weekend, wear of the draining political ads on TV, I made my way out to Agoura Hills to visit a place I had only recently heard about: Ladyface Ale Companie.

Besides the sandwiches, the other draw to Ladyface for me was their in-house beer menu. Starting with a pumpkin pie spice flavored bock and moving to the Belgian tripel, I was thoroughly convinced that their beer was equally well crafted and delicious (especially the tripel).

My sandwich decision was not as easy to decide on. I had looked at their menu a few times the entire week before I had even gone, and was still undecided as to which sandwich I would pick. Finally though I had settled on the croque-monsieur, mainly because of my intrigue with the sandwich ever since watching Gordon Ramsay make one on the UK version of Kitchen Nightmares.

Between the lightly grilled pieces of bread of this croque-monsieur rests two thick slices of Niman Ranch ham, Gruyere cheese and bechamel sauce. The Gruyere cheese was thoroughly melted proving a slightly smoky, slightly salty flavor. The two slices of ham provided a slightly sweet flavor to the mix as well as having its definitive ham flavor. 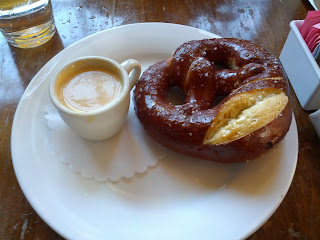 For a person who is not a huge fan of this particular pork product, this ham was delicious and some of the best I’ve ever had, outside of Porto’s cubano.

The grilled bread was lightly buttered, lightly toasted, and highly delicious, keeping the sandwich together until the end.

Overall, my experience at Ladyface was highly positive and delicious. Their beer paired with their delicious food offerings (also tried the mac and cheese and house pretzel: both top notch!) make for an excellent meal away from the city on a Sunday afternoon.

Definitely worth a trip to Agoura Hills.

“Did you have a sandwich to celebrate the fact that it will be at least a week without political ads before the next election season begins?” You had everyone at Ladyface laughing, until we realized you might not be kidding…
But thanks for heading out to Agoura Hills to visit us here at Ladyface, and thanks for the great review!
We look forward to reading more of your musings, as you risk many dangers, in your quest for the next great sandwich. Cheers!

Greetings, Dear Readers!And a Happy Halloween to you all!As a child, I had wondered what it would...