Home / Uncategorized / The Judge Has Ruled…Deliciousness! 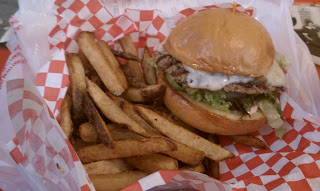 This past week, I somehow managed to be called to report for jury duty for the second year in a row. Not only was I called, but I was selected to be on a jury again.

Despite this, I was not disappointed for the fact that now I had the ability to wander the downtown streets, while everything was open, in order to have sandwiches for you all to read about.

One of my favorite places to wander into downtown near the courthouses is Grand Central Market. Knowing that I may only be downtown for a day or two, I took my time selecting a place to eat among all of the attractive vendors.

The tacos in this places are amazing. But let’s not discuss that here.

I stopped by a newly opened stall called La Mamma’s Burgers which looked exactly like an old lunchroom counter, completer with swirling stools.

The burgers here are straightforward options of beef or turkey, but are fully customize-able with different cheeses, sauces and vegetables.

I went for a basic turkey burger with pepper jack cheese, lettuce, onions, pickles and jalapenos.

Oh, and garlic fries. With huge chunks of garlic. Those were damn good.

The burger patty was delicious. Cooked to medium, full of flavor, and maybe just a bit greasy.

The vegetables were also fresh and crispy, adding a needed crunch to the sandwich. The main problem here was the bun. With the grease of the burger, it was not able to fully stay together through until the end.

But as always with a great lunch counter, the waitstaff and cooks were entertaining, and fun to talk with on my break from jury duty. It was nice to sit down and not have to hear testimony for five minutes.

Definitely give it a shot when you’re downtown during the week.

So, one week down of my jury duty blogs, and one more entry to go on my week downtown for jury duty.  Then I will begin a series of blogs detailing sandwich shops in Burbank that I’ve started with Bryan Mahoney of The Burbank Leader. Make sure you follow him on Twitter (@818NewGuy) as well as myself (@danger_sandwich).

Dear Readers,  I have finally gotten around to creating something for the blog that...