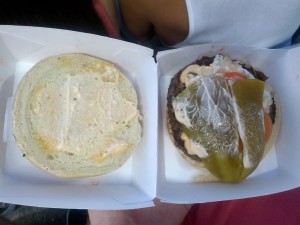 With the high temps in Los Angeles lately, it’s pretty obvious that summer is here in full force. And as we all know, with summer comes one of the most American things of all time: Baseball.

Well, that and Apple Pie, but this isn’t a pie blog. Sadly.

For those that have been reading this blog for quite some time, you may remember my review of the Dodger Dog which originally was a big undertaking, but still mildly enjoyable. Having the Dodger Dog again last year, it seems that ballpark management had decided to make the dog even more gargantuan with a bigger dose of toppings and doing away with the all-beef frank for a pork by-product.

It had become a complete mess, and was definitely less than appetizing.

Heading to the ballpark this past weekend to see Cliff Lee pitch against the Dodgers, I was looking for ballpark food to enjoy on a warm summer evening. Avoiding the Dodger Dog like the plague, I had noticed that the ballpark had a new option: The Big Blue Burger.

Of course with most food from a baseball stadium, you have to be wary about what could happen to your stomach. This burger was topped with chipotle aioli, a huge slice of pasilla chili pepper, tomatoes, caramelized onions and blue cheese.

The first bite had caught me by surprise even though the burger piqued my interest while in line because I hadn’t expected much. They didn’t skimp on any of the ingredients, but neither were they overpowering or too much. The blue cheese flavor shone through, but didn’t overpower the smoky beef, or the slightly roasted flavor of the pasilla pepper.

The tomato wasn’t bad either. Not a mealy slice, this bit of tomato was juicy and definitely had some noticeable flavor to back it up.

The bun though seemed to be in that limbo space between toasted too little and just right so it came off as a little stale (which it very well could have been). Again though, with not expecting much to begin with, this was a small problem with the burger and seemed as if it could be easily remedied with a few extra seconds in the toaster.

All in all, this was a pretty decent example of a burger, and is definitely a top choice to eat if you’re ever at Dodger Stadium.

Unless of course you are able to get to the South Street Steaks stand inside the park. Then of course, you can’t miss out on their sandwiches.

It’s like a Schmitter, minus a couple of letters.

this may be the best comment of all time.

[…] Pasilla Pepperjack Burger stood out not only because of its use of bacon and Pasilla peppers, but also because the patty was made with Hearst Ranch grass-fed beef and glazed with Linn’s […] 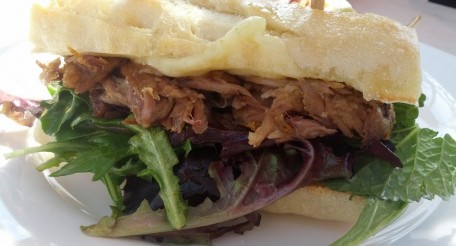 Greetings, Readers!Recently I've been traveling around a bit throughout Southern California...