Home / Uncategorized / A Burger Tour You Say? (Part One)

So, imagine my excitement to hear about Secret City Tours, a food tour that travels Los Angeles, each time with a different theme. While traveling between each stop, our tour guide and his wife told us history and trivia about Los Angeles, as well as played games to win burger-related prizes.

Speaking of which, I won the slider maker for getting the high score at Burger Trivia. Not bragging or anything.

Arriving at the meetup spot early on Saturday morning, I talked with the people who would be my travel companions for the day. Most of them talked about doing other Secret City tours: pies, ice cream, tacos.

But the important tour was the one we were about to begin: Burgers.

Sure, I’ve done a burger tour of Burbank with my sandwich partner in crime, but this tour promised to take us far outside of Burbank into hidden spots we had never even heard of.

Some of those spots might not even be burger places.

Take for example Gigi’s Bakery, a cuban bakery that has been around since 1968, and a place I had never even known existed before. 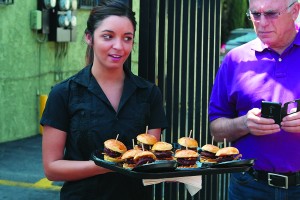 We were served Cubano Frito Burger sliders (as with most of the places so we could try numerous sandwiches), a 50/50 combination of beef and chorizo on a bun that was slightly sweet. I’m a huge fan of chorizo and the flavorings contributed by that meat took this burger to the next level, both heightening the flavor of the beef and bringing its only contrasting spice kick. The sweetness of the bun was an excellent contrast to the savory spice of the patty.

Then they brought out the guava and cheese pastries, which happen to be one of my favorites. You should try that if you ever get the chance.

After we finished those sliders, we loaded back onto our party bus and were told by John, our tour guide, that we would be heading down to Watts.

Not exactly a part of town I had thought would be hiding one of the best burger spots in the city, but then again this tour was all about finding hidden gems. 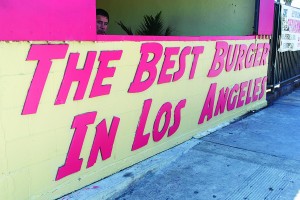 Stopping at Hawkins House of Burgers, we were greeted by a sign that read “Best Burger In Los Angeles”, a bold statement and one that needed to be evaluated, obviously.

As we all sat down we were greeted numerous patrons who all told us the burgers were fantastic. The staff came out and chatted us up as well as Cynthia, the owner.

It has been quite some time since I’ve met such an amazing, energetic, and welcoming owner, but Cynthia is the real deal. She made us all feel like we were at home and had been coming to Hawkins for years. 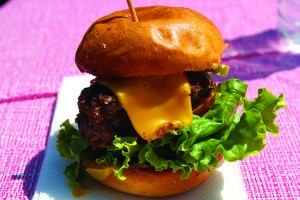 Following up that introduction with a classic slider made for a pleasant experience. A thick Angus slider patty, topped with lettuce, tomato and onion, this slider was delicious. The toppers brought fresh, crisp flavors forward while the burger was savory and delicious. I had one, but I wanted many, many more.

After our stop at Hawkins it was on to our next stop in Downtown Los Angeles, but that is a story for another day.

2 Comments On A Burger Tour You Say? (Part One)

A Burger Tour You Say? (Part Two) ‹ The Danger Sandwich ● danger is the best indgredient Reply

[…] With some Boulder Colorado sourced beef, house-made american cheese, red onion, house-made pickles, tomato, and 1000 Island dressing on a sesame seed brioche bun. It’s also cooked to medium as a standard, so if you’re the type who likes it well-done, just suck it up and eat it like this. […] 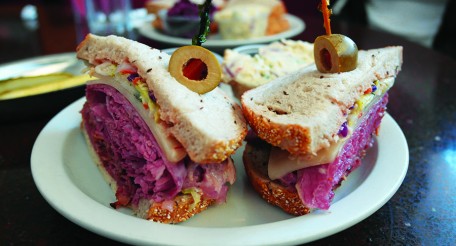 Greetings, Readers! You know, long ago I was once a fresh faced, newly arrived transplant...