I hope that you’ve digested last week’s blog and you’re looking forward to the continuation of my Burger Tour through Los Angeles with Secret City Tours.

I’ve spent a lot of time in DTLA and have visited a few spots in the past (like One, Two, Three, Four, Five), but Secret City’ 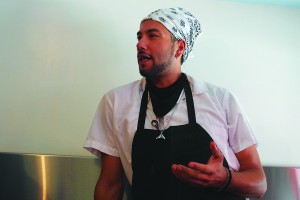 s Burger Tour opened my eyes to two other places that are worth a return visit.

Just having opened a few days prior to our stop was Hamburguesas Punta Cabras, a small and inviting shop on Spring Street. Walking inside with our tour group we were greeting by our burgers waiting on the counter for us. Before we could eat though, Chef Josh Gil gave us insight into their classic burger topped with shredded lettuce, charred green onions, houses pickles and 1000 Islas Salsa.

What really impressed me with this burger was the sweetness brought on by the house pickles. In contrast to the delicious and savor 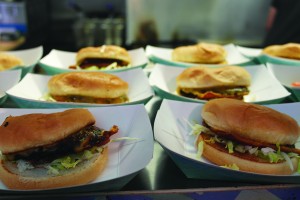 y patty, this bright spot really shone through and made this burger stand out. This is definitely a place to stop on your travels through DTLA.

Loading back onto the bus after Burger #3, we headed to a place a number of people had told me about lately, The Escondite. Having appeared on Adam Richman’s Man Finds Food, the word on this place has spread fairly quickly. Trying a different sandwich than he did, we were greeted with the Captain Kangaroo Burger, a massive undertaking for number 4.

We were each given a half of an e 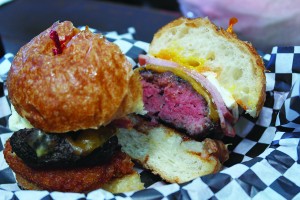 I know, it’s intense, and a full burger on its own would be more than enough to satisfy. Despite the challenge of burger number 4, it was an amazing find and one I will definitely have again.

The flavors blended well, and as a fan of eggs on burgers, the creamy and savory flavors brought on by that worked well with the fried has brown and complemented the two different meats. 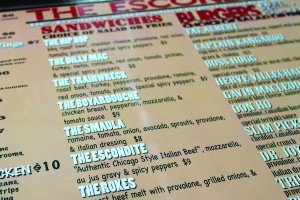 of the savory with a kick of vinegary spice. In every bite you could taste all of the delicious ingredients.

After that gutbuster of a burger, we had one last stop: Chimney Coffee House.

I had read about this place recently as their Larb Burger is apparently one of the best in town. Pulling up in front of the shop I was pleasantly surprised to find out we would be trying this hidden gem in a place that would be least expected to sell burgers.

Larb is a Thai inspired burger patty consisting of ground pork mixed with herbs, citrus and chili. It has the savory flavor of pork with a sharp citrus hit and a spice finish. In other 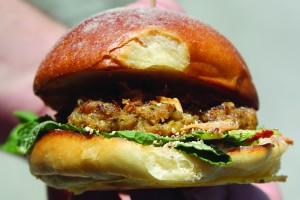 words, it’s amazing. The patty is topped with larb mayo, dressed mint, toasted rice powder, fried shallots (which added a nice crunch texture) all on a house made bun.

I was seriously blown away by this burger. The bright flavors were unexpected but make this burger shine through the savory pork and sweet bun. It was a great finish to the tour with a burger that felt light, but also satisfying.

Overall, the Larb burger is not only worth visiting while you’re near DTLA, but it’s worth driving from out of your way to find. Seriously, go and grab one, maybe add a Thai iced tea or a coffee and kick back in the oncoming summer heat.

Ladies, Gentlemen, I have to say that the Scret City Eat Your Way Through LA Burger Tour was fantastic. I would recommend it the next time they offer it (even if there are different spots) because it’s an incredible experience. The owners of these restaurants show their pride in the food they make and John and Laura Bwarie run an entertaining tour through the foods and neighborhoods of Los Angeles.

Next up, I’ve got an awesome new video for next week’s review and maybe it has a little tie in to a movie franchise that might just rhyme with Shmavengers.

Comment On A Burger Tour You Say? (Part Two)

[…] Settling in with a tart Strawberry Broadacres from Phantom Carriage, and taking a seat in the outdoor space I awaited by sandwich, the aptly named Classic Burger. […] 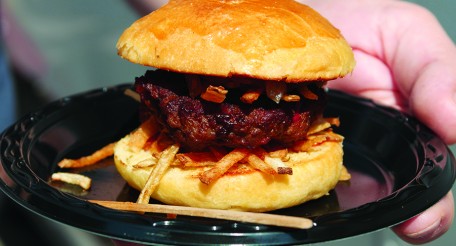 Greetings, Readers! As you know, I am the type of person who wants to find out more about...